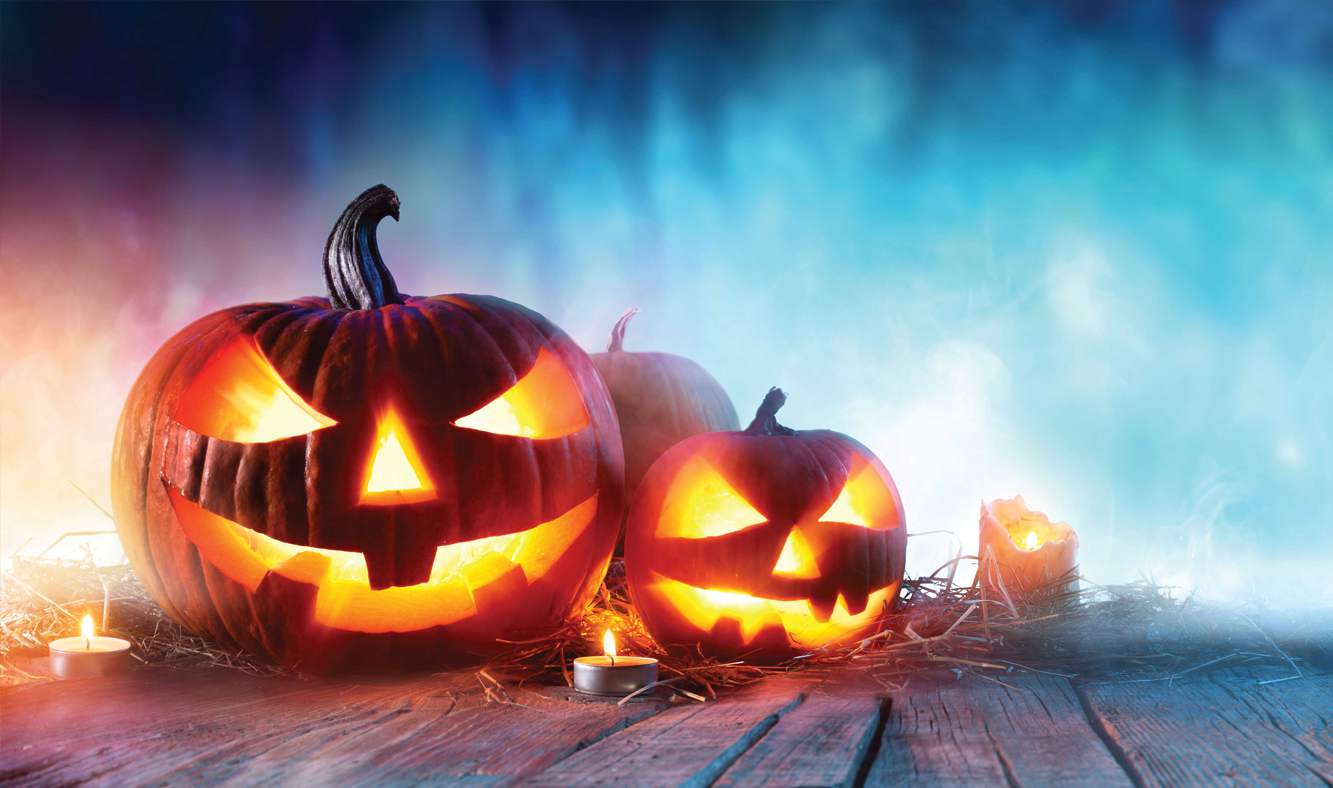 For Halloween, one pumpkin just won’t do.

Pumpkins. Those were the Halloween decoration of choice around our house when I was growing up. And we didn’t have a pumpkin every year, either. I think it depended on my mother’s mood.

We might get a pumpkin or two one year, skip a year, then get a pumpkin the following year. I may be wrong—my sisters can correct me if their memories are better—but I don’t ever remember carving a pumpkin. If we had a pumpkin, it was just a pumpkin. It never made it into the house, but was placed outside the front door. Usually, it sat there for weeks, transitioning into a Thanksgiving decoration as that holiday drew near.

My parents were thrifty.

Curiously, I carved a pumpkin for the first time in my life just last year, during a Halloween celebration at the Spencer Honors House at UAB. There were lots of pumpkins, along with tiny pumpkin carving knives, stencils, and candles to light up the fruit from the inside upon completion.

As a pumpkin artist, I was a complete disaster.

A couple of the honors students rescued my pumpkin and cleaned it up as best they could. They are, after all, honors students. One of the other students carved a pi symbol into her pumpkin. Get it? Pumpkin pi(e)? I thought that was pretty funny. Of course, there was a sneering Donald Trump, too. Orange is his color.

As a child, I loved Halloween because it was the holiday where we went from house to house in our neighborhood collecting free candy. My sole goal on Halloween was to get as much candy as possible. I’ve never really grown out of that.

Each Halloween, Veronica and I buy bags of candy—the candy we like. I secretly hope we won’t get many trick or treaters so there will be plenty of Reese’s Cups and peanut M&Ms and Snickers bars left over. On the Southside where we live, there usually are.

Turning off the front porch light early helps, too.

Halloween has turned into big business, though.

In 2017, sales for Halloween merchandise reached a record $9.1 billion, according to the National Retail Federation. Five years ago, Halloween spending was around $7 billion. It’s a booo!-ming business!

Costumes generated about $3.5 billion of that amount last year; people spent nearly $450 million just on costumes for their pets (dressing the pup as a hot dog was the hot item). Candy sales came in at about $2.7 billion, and we spent another $400 million on Halloween greeting cards. I’ve never received a Halloween greeting card that I’m aware of.

But people spend as much on decorations ($2.7 billion) as they do candy these days.

Sure, lots of people don’t decorate much for Halloween—I still see the lonely pumpkin in front of a few houses, and that’s all—but others go all out. Like many people do at Christmas, some people spend thousands of dollars on Halloween decorations for their homes. One can cruise the neighborhoods all around Birmingham in the days before Halloween and see lots of homes spooked up to the max.

I have a couple of friends who are fairly obsessive about decorating for Halloween.

Clowns really scare some people. Not me. But Michael Myers of the Halloween slasher films is frightening. Especially when he actually moves around and makes sounds.

Missy, who lives in Hoover, goes all out. But so does Denise Haynes, who lives in Brook Highland. She’s the office manager for a Highland Avenue law firm, and says she decorates the office more for Halloween “because our office is in an old house built in 1892, and it looks kind of spooky. Plus, we have a ghost.”

I’m sure the ghost helps.

Norris and Haynes come by their Halloween obsessions honestly. They loved Halloween as children and, as I can attest where candy is concerned, the Halloween in us never really grows up.

Haynes remembers a specific Halloween when she was 10 years old. Her mom took Haynes and her best friend out to trick or treat, but it was pretty boring at first, she said.

“Then we went to this really old, stately house in the nicer part of Anniston,” Haynes remembered. “We go up to the door, and the door creaks open revealing a man holding a lantern. He had long, gray hair, and was dressed in a white night shirt. He had really creepy teeth and spoke in a whisper, until he laughed this incredibly ghoulish laugh. It scared me and my friend so much that we ran. All I could hear was my mom and the man laughing.

“It turned out he was a state court judge and that he just loved Halloween so much, he put in a lot of effort to make it special for the kids. And he did. I’ve never forgotten that sight of when he opened the door.”

“I was 13, (and) I was home alone,” Norris said. “My childhood friend Jim Newman, who is now the Cowboy for the Village People, knew it. He showed up at the back door of our house in a sheet, hat and glasses, holding a butcher knife. He looked exactly like Michael Myers. I screamed, and he just stood there and didn’t move. Eventually, he took it all off and started laughing.”

Both Norris and Haynes estimate they have spent around $5,000 each on Halloween decorations. They aren’t fooling around.

I don’t believe my mom spent more than $15 combined on all the pumpkins we had at Halloween during my childhood.

Still, decorating is worth it, Norris said. “We just bought our house last year. I think the greatest compliment I received was from a lady and her three children. She told me she normally doesn’t take the kids trick or treating on our street because it’s a busy street, but this year the kids demanded that they come to our house because they loved the decorations we have.”

And, no doubt, the candy. Both Haynes and Norris are Halloween fanatics after my own stomach. Both give out chocolate, and the really good chocolate, too. Norris has many on my list: Snickers, Butterfingers, Hershey bars, and Reese’s Cups.

“You can’t cheap out on candy for Halloween,” Haynes said. “Kids look forward to it.”

But don’t forget to turn out the porch light early if you want many leftovers.

Let us know in the comments section if you or a neighbor decorates big time for Halloween. • 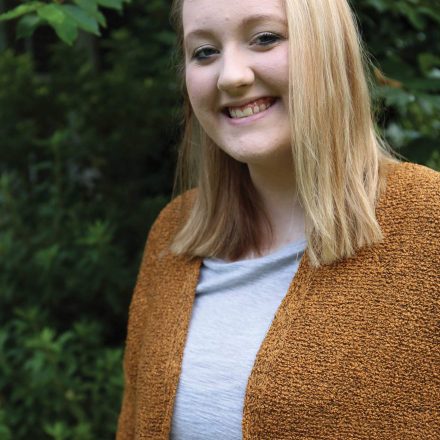 September 6, 2018 admin
Even without the brain tumor, Lauren Beck isn’t a typical 13-year-old girl. By Joey Kennedy The brain tumor is there, yes, attached to the... 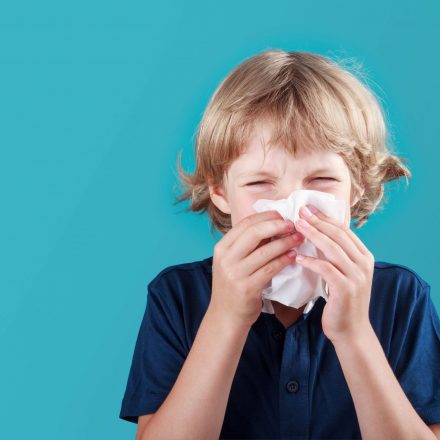 July 18, 2020 B-Metro Editor
By Joey Kennedy I’m curious to see how Alabama’s public schools, colleges, and universities are going to safely open their doors in August. With...
Close