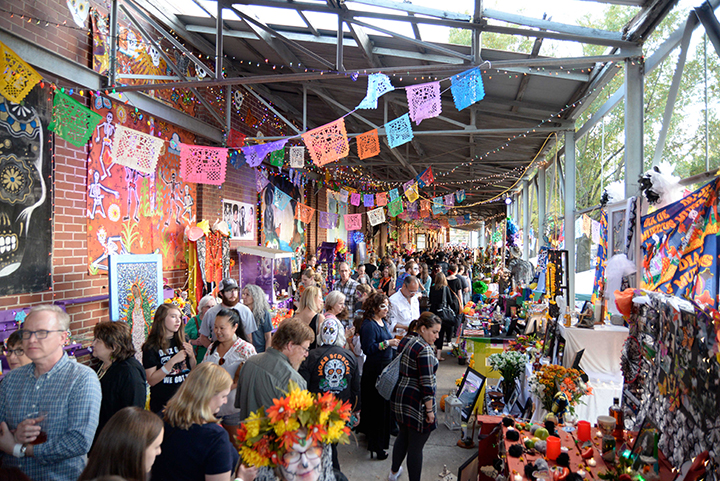 The heartbeat of this popular festival is the art, altars and celebration of life.

In the 16th Birmingham edition of a centuries-old celebration of life, Dia de los Muertos will be held on Friday, November 2 beginning at 5 p.m. at Pepper Place.

Colorful and full of sound and music, the festival, founded and managed by Bare Hands Gallery, is one of Birmingham’s most popular festivals.

It began back in 2003 with a Day of the Dead-inspired installation at Bare Hands Gallery. Artist Tracy Martin built the installation in honor of her father, noted civil rights photographer James “Spider” Martin, who died earlier that year. Spider’s memorial was eagerly embraced by a small group of artists and friends, and thus began the celebration at Bare Hands every November 2 that grew with each passing year, becoming a cherished cultural celebration of life—and remembrance of death—in Birmingham.

The festival is made possible by countless volunteer hours, given to create an experience that respects the traditional heart and soul of Mexico’s sacred Day of the Dead remembrance, which combines flowers, music, food, stories, friends, family and memorials to honor those who have gone before. Many say the gathering has brought them a stronger, broader sense of community. Personal remembrances (ofrendas), family crafts and puppet shows, music, procession, memorial roll call, local artists’ market (mercado), food and beverage vendors, face painters and more are all part of this unique cross-cultural celebration. There is also plenty of great live music as an accompaniment to the festivities.

Restaurateur Guillermo Castro was another driving force behind the growth of the festival before his own untimely death. His mother, Maria Beauregard, remembers the importance of Dia de los Muertos festivals from her years growing up in the north of Mexico.

“The things that we put on the altars mean so much to us as we remember our loved ones. It is a way we can celebrate their souls. And the idea behind it is growing in this country now,” Maria says.

The migration of this ancient Latin festival to the U.S. and Birmingham has been gradual, but it has picked up speed as evidenced by the crowds that attend the event at Pepper Place.

Matt Layne, young adult librarian for Emmet O’Neal Library for the past 10 years, has been involved with Dia de los Muertos since the beginning. “In 2003 there were probably 100 people there. It was a lovely little celebration. The next year more people showed up and brought remembrances of their loved ones. It grew  organically and was such a beautiful experience in that way. Guillermo Castro and Franklin Biggs would bring food to the festival. And it just kind of snowballed after that. It’s been an amazing thing to watch,” says Matt.

For Matt, the poignancy of remembering the dead is what is so meaningful. “I came up with the concept of doing a roll call. We asked people to submit the names of their loved ones and we read those from the stage. For me, that is where it all comes together. It is the whole idea that as long as you remember your loved ones they are never really gone. So when I read those names from the roll, the people in the audience answer present for their loved ones. It really is a spiritual, powerful, beautiful moment. That is where it all coalesces for me. It is such a beautiful way to celebrate the lives of people we love.

Matt built a Dia de los Muertos altar to his father who passed away in 2011. “I went through the funeral process, wrote his obituary and delivered a eulogy. Going through that process, I felt like I was there for everybody else but didn’t have time to mourn myself. Then all of a sudden I was back at work. It is so fast,” Matt says.

“I had been involved with the festival for several years, but I was still intimidated by the process of creating an altar. But I did it. It was a private, personal and poignant experience for me. 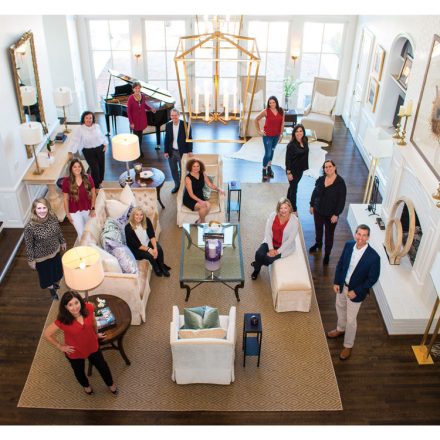 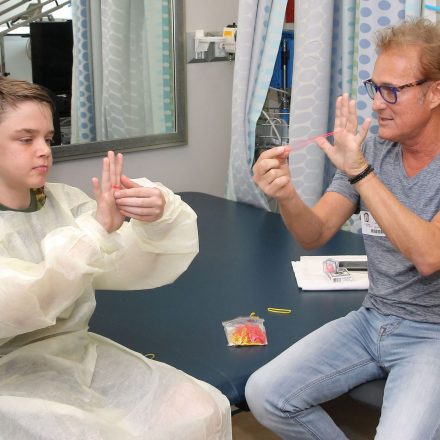 January 27, 2022 B-Metro Editor
AIM is part of a whole-person approach to healthcare focusing on the mind, body, and spirit of a patient or caregiver. AIM is part of the growing...
Close