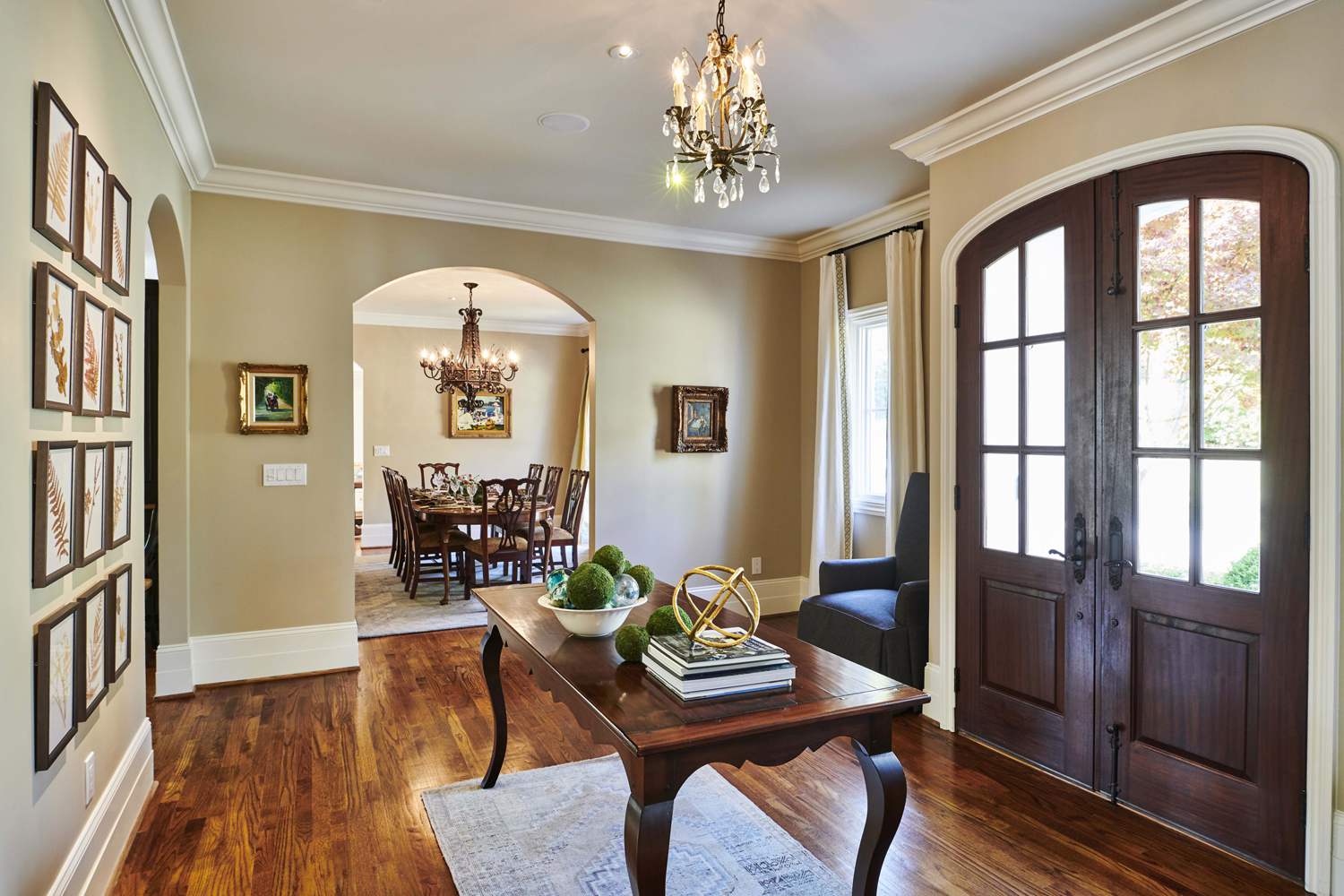 Working with designer Mandi Smith T, a couple spent years tweaking the details of their Mountain Brook home until it was everything they wanted.

It started with the foyer.

When Craig and Cindy Fravert were struggling with what felt like an awkward layout for their home’s entryway, their interior designer, Mandi Smith T, saw the challenge right away—the room is wide and shallow, rather than narrow and deep as foyers typically are. But she also saw the potential. “I love this room, because it has sightlines into every main living space in the home—the living room, dining room, family room and covered porch,” she says. The trick was to take advantage of the foyer’s unusual dimensions rather than fight it, so Smith T settled on a rectangular center table in the space to create a welcoming feel and provide a spot the couple could decorate seasonally or change out accessories on a whim. A grouping of pressed and framed botanicals from the homeowners’ own garden hangs on the wall behind, completing a look that is both distinctive and simple.

It was that kind of problem solving that has kept the Fraverts calling on Smith T whether they want to update a room, invest in new furniture, or, most recently, embark on a complete overhaul of the kitchen and master bath.

One project that significantly changed how the Fraverts use the home was the addition of a new, spacious outdoor living space. The Fraverts had already torn out what used to be a small glassed-in room at the back of the house to create an open-air space. Later, after they decided to extend out the porch, Smith T helped them create a full outdoor dining space as well as a generous seating area with a fireplace and TV, perfect for watching a game with friends or just relaxing at the end of a long day.

But two of the most impactful projects the Fraverts have undertaken are indoors: full renovations of the kitchen and the master bath.

Both rooms, which they decided to tackle at once, had a similar problem. They felt small and cramped. But Smith T—whom they decided to hire as their construction manager as well as designer to help keep an eye on the execution of every detail—saw a clear path for transforming both spaces.

For the master bath, Smith T found several ways to create a room that felt larger and more streamlined. A closet at the back of the bathroom was underused and taking up valuable space, so they took it out and gained two additional feet of shower space. “Then we glassed in the entire shower, so that went a long way for making that room bigger visually,” she says, adding that Craig loves one detail in particular: a round cutout in the shower door to pull it open and closed in place of a traditional handle. “That way, all the hardware goes away, and all you see is the pretty marble inside.”

Then there was the matter of the bathroom door. There was a small walkway connecting the master bedroom and bath, but no door between them. Smith T suggested a sliding door. “But we didn’t really want that barn-door look, because it didn’t fit the house,” Cindy says. “So Mandi came up with an idea for a sliding door with an antiqued mirror and design on it, and it almost looks like a piece of art.”

The antiqued mirror is repeated inside the bathroom on the cabinetry tower that separates the vanities. “I wanted the bathroom to have a little glamour and sparkle,” Smith T says, “and I felt that was a fun way to do it. But it also hides clutter.” Another custom touch includes the addition of heated floors, which provide welcome relief on cold winter mornings.

The renovation of the kitchen was equally dramatic. Here, everything was changed but the footprint itself, with the result of creating far more visual space and opening the kitchen up to the den. Smith T achieved that in a lot of clever, strategic ways.

For one, she advised ripping out the cabinetry that was there and adding instead what she calls a breakfast armoire, with electrical outlets and even water piped in so the coffee maker, toaster and other appliances can stay inside, hidden from view when the doors are closed. The breakfast nook itself features a small banquette; Smith T notes that it saves nearly a foot of space that stand-alone chairs would require. They also added a large picture window over the sink for more natural light and a view of the backyard. Finally, Smith T recommended replacing the island with one that has a narrower profile and feels less obtrusive.

Meanwhile, because the goal was to open up the room and make it feel larger, Smith T advised moving away from hanging lights and adding wall sconces instead. “I think sometimes when people have an island, their immediate thought is to choose a pendant to go over it,” she says, “but in some ways it can turn into visual clutter in a small space.” In the same vein, they removed a chandelier from the breakfast table and used well-placed wall sconces in that space as well. “They draw your eye all the way to the back wall—which is a great trick to make a room feel larger—and there are some amazing sconces available now to be able to do that. They almost feel like jewelry in a room. We picked up some with the gold tones that are so fresh, and we repeated that with the hardware we used on the cabinetry.” Finally, an arched entry that led from the kitchen to the den was opened up by enlarging it and squaring it off, greatly enhancing the flow of the couple’s living space.

The Fraverts love it. “It feels so much more open,” Cindy says, “and that’s what we were looking for—a space that felt bigger even though we weren’t extending the footprint.

“We have always really liked the one-level living we get on the first level and how it flows from the front to the back of the house,” she continues. “But now the way Mandi opened it up, family and friends come over and everyone can gather without it ever feeling crowded. We just love it.” 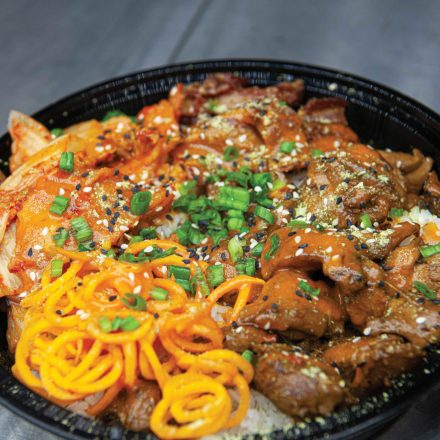 November 10, 2022 B-Metro Editor
Lot of comfort in that bowl of noodles. Poppy has hit the streets, and its bringing noodles along for the ride. The people behind the success of... 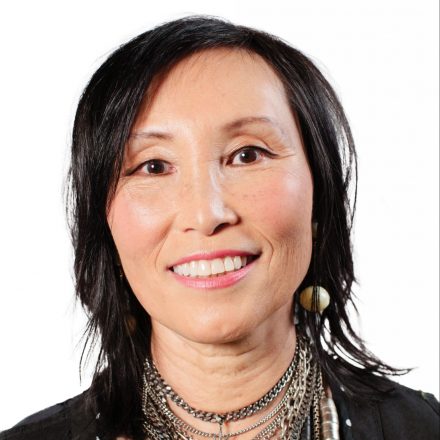 November 29, 2021 B-Metro Editor
Photos by Graham Yelton Suki Newman  “I grew up in Incheon, South Korea, but I’ve called Birmingham my home over 40 years. I am a wife, a...
Close